Of Imps and End days


In the time of the Kill Switch, in the end days of Spun, when the Unspun Worms roamed abroad and Spunland Mansions lay empty, with all it's custodians gone, it was left only to spunlings to catalog all that was right or wrong. No one officially noticed events of great import; when dxkills16 became Majesty of Spun on both sides of the Great Atlantic for the third time, where were the heralds to announce her achievement and the choirs to sing her praises? There were none even to question the scurrilous rumors and treasonous talk, that perhaps she was actually the Queen of all things Spun, (come back to save us all?) a conjecture based not only on her spuntastic achievements, but on the generosity of her wisdom and the sharpness of her eye, for it was dxkills16 who noticed that she was spurned by the Spun Imp during the coronations. Why would this be?

Perhaps an answer could be found in the pages of End Time News, a noteworthy journal which in these trying times rose to the challenge of covering the impending apocalypse. Their intrepid journalists were the only ones to record the gradual dissipation of Spun, and even managed to interview a Constructo Spunner, a most remarkable feat given the ghostly state of Spunland Mansions. Some would dispute that a lowly Constructo could shed much light on these terminal events, but none could deny the spun potency of his crudely uttered prophecy: 'One day the Spun Queen will return and the way to Spunland will open again'.

The very existence of ETN ensured that those with an intimate knowledge of Spun, or the unspun desire to claim such, had a worthy transmitter for their erudition, and so it was that an odd letter was received for publication:

"To whom it may concern,

When we was working for less than peanuts and harder than hercules, mistakes were made, and things ignored that otherwise should have been dealt with. Them that always know best insisted that the we press ahead with the delicate spun engineering to manifest the Spun Imp, even though there was barely the time to complete our maintenance work, nevermind introduce anything new. Not that the Imp really was new anyway - he was there back at the beginning of Spunland, but no many ever saw him. Anyway, the maths were bad and untested - as you can see if you pay close attention. The Imp gets summoned when you reach 2500 spun points, as soon as it's there bobbing on your head it'll attack the hopper if you get close enough (for long enough), and you'll get some points for having it complete its purpose. If you avoid the hopper and score another 2500 points the Imp will morph into a more powerful Imp and grant you even more points for achieving a hopper kill. Beware the hopper for another 2500 points and you'll find yourself with the most powerful Imp.

Now here's the rub. If for any reason you bank your score, (and so your current score is reduced to nothing) this information is not passed from the Bank of Spun to the Imp's logic, which means the tracking of the points aft goes agley and you can find yourself missing an Imp for quite some time. Normally this wouldn't really matter, but I feel its only right to let folks competing in the Coronations know that this is the case. If you are taking the quest for the Spun Crown seriously you should save your spun points and leave Spunland altogether shortly before the coronation begins, so that when you come back and  join the contest the counting of the score towards your Spun Imp will work correctly. I did try saying at the time that we shouldn't be tinkering with the engineering under the circumstances, but nobody listened.  That's what happens when you don't have a Union.

Despite the depletion of Spun and the halfway mark of doom having been reached, spunlings kept coming back to compete for the Spun Crown every Tuesday (apparently from 8 - 8.30 pm GMT in Spunland EU and 4 - 4.30pm PST / 7 - 7.30pm EST in Spunland NA). Indeed, there were even rumors that unscheduled coronations had taken place... but who knew how, why or when? 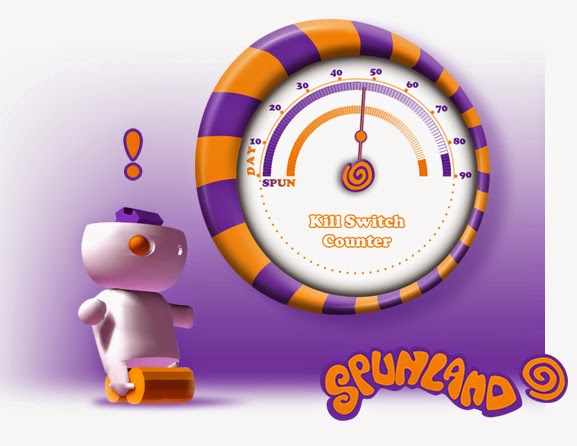