Kings of Spun Independence The First!

And what Spuntastic Coronations they were! The EU was busy and bright, festooned with fireworks and full of serious coronation contenders. The contest started on the stroke of the Spun Harvest with Armor-kings-2000 taking their one and only shot with the crown before new comer AKELX made their first of several successful claims on the regal prize. Majesty luukhoekstra joined the fray following the second harvest, looking ever the part of the King-to-be only to have AKELX stake his second claim, to then lose out to Imhokh's first gambit. Small_wave and Rockhead80 both managed to compete before sam_reynolds01 ghostlinged in, causing Uncle Spun to bet with i-munki that sam or luuk would win, but what do they know? MAXMALO also took a turn with the Spun Crown before the final harvest when AKELX lost out to Rockhead80 who was then trumped by Imhokh, winning the 4th of July Crown on 17,567 Spun Points! All Hail!

Uncle Spun arrived on the other side of the Great Atlantic to find Spunland NA disapointingly quite. Alas, he thought, these colours belong here and yet there are few to see them... Then lilmonstersmiler informed him that this was the quiet instance, in the other were many names familiar from the annals of the Kings of Spun, as Spun DeDuke would find out when he fortuitously arrived there. The quiet Contest began with krazekid263 and did not stay quiet for long. lilmonstersmiler took the crown which looked as though it belonged to her, losing it but briefly to RamenNoodleChef, before reclaiming it then employing the killing of the spawning Spun Hopper tactic to grind up her score. The second harvest saw more contenders take the crown than poor Uncle Spun could note; a_AAA1455, GamerGod49, EpicDeafGirl420x, KiLLERJASON, bennytran44 and krazekid623 all managed to share claims of the Spun Crown with lilmonstersmiler. Dr_Zoobilee-Zoo became the Harvest King of the penultimate Spun Cycle with henrynguyen making a valiant play against GamerGod49 and lilmonstersmiler. The final harvest seemed like a play off between krazkid23 and lilmonstersmiler, when to the surprise of all abhraham_us, seemingly by accident whilst planting a seed, plucked the crown from the head of his friend lilmonstersmiler and was inaugurated NA King of Spun Independence the First with 32,403 Spun Points! The drama!

Of the Second Spunland Instance Spun DeDuke had this to say:


Yee-ha! Well a twice in a lifetime chance to be crowned King of Spun! Yes, because we had not one but two instances going on for the Fourth of July celebrations and it was packed to the Spun rafters!

And we’re off to a smokingpistol start! – Quickly grabbed by Darth_Matt92 And then by Maxx_Mega and shortly after Vampirefun23 – lets take a breather and wow MHX_A1R come in for a steal – the game is on as SmokinP come back with a comfortable take and holds it for a while, so we wonder where is sam_reynoldsUS – Is he playing tactics here as he’s not yet claimed the crown and sure enough bang he’s in for the kill till KamilTiger wrestles in a massive tackle as a err, cute little bambi fawn a lolloping across the spun plains… Oh, while planting seeds – guys we got us a glitcher!

And so the storm ends… but KamilTiger picks up the gauntlet once again and prances off around the border fence dropping little brown nuggets of – wait no, she’s  planting seeds.

Oh now sam_reynoldsUS has got it – I missed that as I was too engrossed in the wild life. Spiderboy123456 comes in with a slickly silk smooth manoeuvre which is short lived as Maxx_Mega takes it back and then again lost to little hobgoblin. Nature fights fantasy and kamiTiger is back around the perimeter dropping those  seeds a plenty – then DarthMatt92 the self-proclaimed glitcher takes it and KamiTiger takes it back again!

I blink and yawn and suddenly we’re into the last 6 minutes and DarthMatt92 is sliding along till sam_reynolds hoists it off and runs with it till KamiTiger prancess through with gazelle like grace to have it taken away by Ren_Echo another long standing spunling – last two minutes and sam_reynoldsUS holds it through a heavy storm  while it shrinks – can he maintain it before the storm ends or with time ruins before… We’re over 30minutes by ten seconds and the crown is claimed!!

Well Done sam_reynoldsUS  you are ?? ing of Spun! With a cracking score of 46,474 without glitching – see it can be done just as you said DarthMatt 92J

Uncle Spun is pleased to report that following the contest many of those taking part managed to meet in the same instance, and thus he was able to photograph both Kings together - big Spun thanks for your patience with Uncle Spun's camera fumblings! And perhaps even greater Spun thanks to all who gathered to dance, pose pleasingly and chat. There were some spuntastic suggestions made for the future of Spun, many small practical things learnt and a few decisions made. Now it's back to toiling on the next Spunland Update, which should go live (all spunning well) on the 30th of July to bring some new rewards , an update to the Spunland Cottage and various Spun improvements, details to follow. In the meantime here's an interview madmunki recently did with PSHome Gazette... 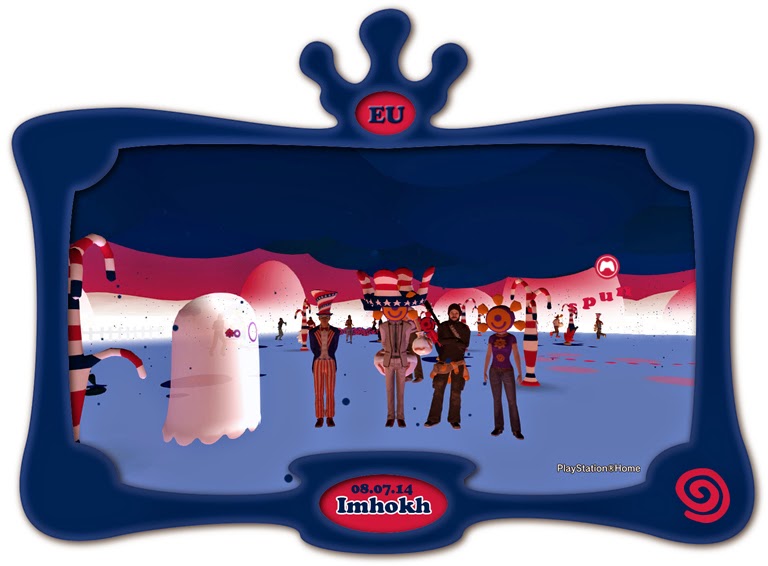 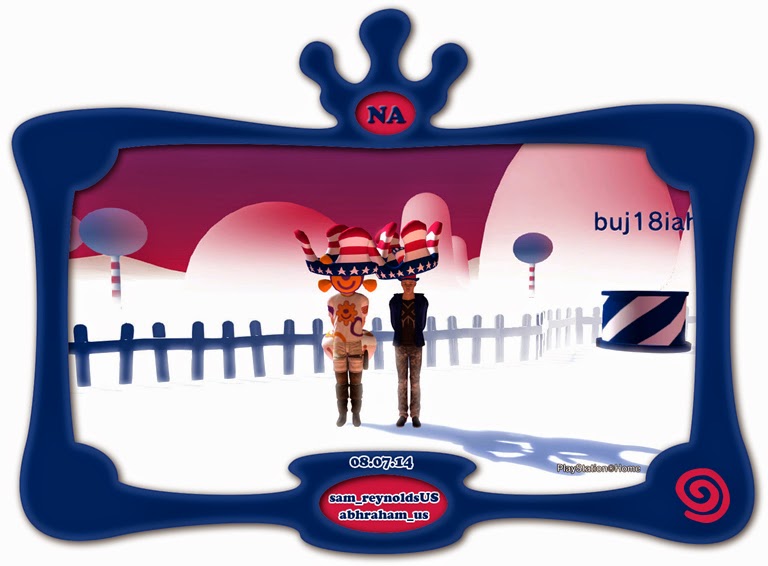