At the stroke of midnight Greenwich Mean Time on the 31st of December, in the year 2014 a low rumble (perceptible only to spun bunnies) sounded from out the Great Spun Pipe at the end of Spunland. If one could only have plunged down the pipe, dodging the Spun Hopper on its wicked way up and followed the groaning to its source - to the great engine room of Spun, where meet the pipes of Spunland, Spunmas and Spun'oween, one would have found a situation most... unspun.

The Clock of Spun Seasons may have chimed the turning of the year, and the Shift Siren blared, but there were no Constructos there. Following a notice of eviction the engineers had all been sacked. None there were to set the dial from Spunmas to Spunland, no one to turn the mighty valve and let the new Spun flow. And so with an ominous shudder the Clock of Spun Seasons stopped and the groaning started as the mighty valve began to turn slowly, all by itself. The dial flicked to Spunland and for the first time ever the Spun Pressure Gauge dropped. With a click and a pop a hatch atop the Great Spun Pipe sprung open and up thrust a new gauge like some unspun jack-in-the-box. This is what it looked like: 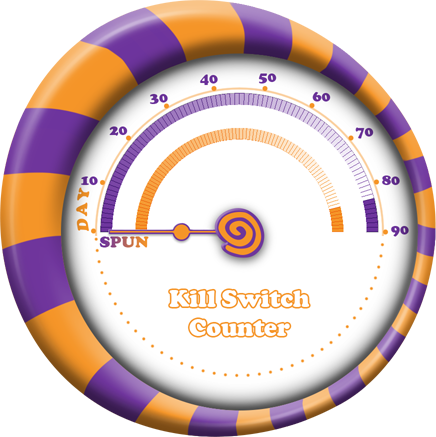 Now, if upon witnessing this most unspun occasion one had climbed the ladders, crossed the gantries and wound one's way back up through the great halls of engineering and into the bowels of Spunland Mansions, quiet now and empty, then traced ones route through the echoing halls until one came to Uncle Spun's study wherein all was as he left it, if one had known where to look among his papers a letter dated 20th August 2013 could there be found which may well pertain to such events...

We are happy to inform you that the Great Spun Pipeline is now complete, and you may activate it whenever suits you and yours, however we must warn you that due to the absence of our Queen we must take measures to protect the Spun, projecting it as we are, into an environment of questionable sovereignty. Should the Spun Seasons fail to be observed for any reason whatsoever the Kill Switch will be engaged, whereupon the daily flow of Spun will drop incrementally until it is no more. We need not remind you that aside from many other adverse effects, this will cause the Unspun Worms to wake, so see to it that such a thing never comes to pass. Let flow the Spun!

May the Spun be always with you!